We are a Reliable Repairing Company in Chula Vista.

We provide professional services for the repair and maintenance of home and commercial appliances for more than 15 years. Our professionals work with all brands of household appliances. Our experience and knowledge is the best guarantee of quality appliance repair.

Why The Refrigerator Beep | Service Center 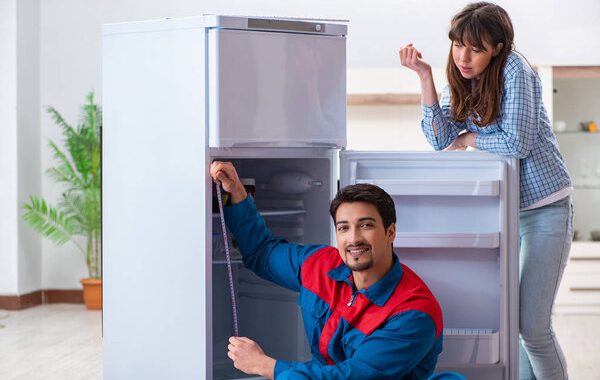 Indeed, a number of malfunctions in refrigerators can be accompanied by unusual sounds. However, before going to the workshop, make sure that there were no such sounds before (perhaps you just did not pay attention to them?). If the sounds were always there, and the refrigerator freezes normally, then there is no reason to worry and call a specialist. If the strange and incomprehensible sound has appeared recently or it is accompanied by other signs of malfunction, call the service worker.

On the basis of the experience of refrigerator repair by the masters of our service, we have collected the widespread breakages, when the refrigerator makes strange noises.

In fridges with No Frost, the only evaporator is located in the freezer compartment. The cold air is blown into the freezing chamber by the fan through the system of air ducts. The cold airflow in the compartment is regulated by a damper.

The No Frost evaporator produces frost during the cooling cycle. When the evaporator temperature decreases to a certain value, the defrost sensor (defroster) is activated and the heating element is activated. It melts the frost and melts water is drained from the chamber into a special tub near the motor compressor. There it evaporates from the heat of the motor. As a result, the freezer is not covered with a “snow coat”.

It is not uncommon for one or more units of the defrosting system to fail. This can be a heating element, defrost sensor, fuse, or defrost timer. Gradually a snow coat is formed in the freezer (as in a “normal” refrigerator). The fan blades get caught in this snow and ice. And as a result, there are extraneous sounds: grinding, knocking, and cricket sounds. If the problem is ignored, the chilled air duct freezes completely, and the cooling compartment stops cooling.

It is not uncommon for a defrost system failure to cause the fan to malfunction as well. It tries to crank the blocked blades, and as a result, they break or the fan motor burns out from overloading.

The fan in the No Frost refrigerator is defective

The fan in No Frost refrigerators is needed to force cold air from the freezer compartment into the refrigerator compartment. If the fan bearings’ lubrication has dried out due to natural wear and tear, it may produce unusual noises: squeaking, whistling, or singing like a cricket.

Another possible cause is that the bearings are loose or the fan shaft is worn out, which causes the fan to wiggle and catch the blades in the housing. In this case, you will periodically hear a knocking sound.

The motor compressor is malfunctioning.

The motor compressor creates pressure and “forces” freon to circulate through the refrigerator’s cooling circuit. The refrigerant, passing through a narrow capillary line, enters the “wide” evaporator, where its pressure drops. As a result, freon boils and takes heat from the chamber. Through this process, the refrigerator freezes.

Unfortunately, as the refrigerator operates, the motor compressor gradually wears out and becomes unusable. Therefore, when it operates, it makes unusual noises. Here are the motor failures that cause strange noises.

Inter-turn short circuit in the working or starting winding. With this malfunction, the compressor gets very hot, almost immediately after switching on the starting relay is triggered, and it shuts down. Therefore, users hear constant clicks of the relay.

“Wedge” of the compressor. This is mechanical jamming of the motor due to changes in the geometry of its parts due to their wear. In this case, the motor hums, but the refrigerator does not freeze.

Wear or popping of the buffer springs, on which the motor-compressor stands or hangs inside the case. Over time, the springs wear out and lose stiffness. If the refrigerator has been moved recently (especially on its side), one of the springs may have failed. In both cases, when the compressor vibrates during startup, operation, and shutdown, it bangs against the walls of its housing and you hear a ringing and metallic clatter.

Mechanical failure or deformation of the compressor inlet or outlet valves. Because of the malfunction, the motor is constantly running, but can not create the required freon pressure, so the refrigerator does not freeze.

The starting protection relay is the assembly that starts the motor by shorting the operating and starting winding and also protects the compressor from overloads. If the safety mechanism fails, the relay erroneously reacts to even slight heating of the compressor, which normally should not cause an emergency shutdown. As a consequence, the motor switches on and then shuts down after a few seconds. At the same time, you can hear the clicks of the relay switching.

Worn rubber gaskets under the compressor

The compressor motor vibrates quite noticeably when starting, running, and shutting down. That is why in the places of its attachment to the refrigerator bar, there are special rubber gaskets, which absorb the vibrations. If the gaskets are worn out and/or destroyed, the compressor mounts knock against the bar.

The freon line is broken and there is a refrigerant leak

In old “regular” refrigerators with manual defrosting of the freezer compartment, its evaporator consists of a net of tubes with freon and covers the whole surface of the freezer. Often users, trying to defrost the fridge faster, beat off the ice with a sharp object, puncture the evaporator channels and hear a hissing sound. This is how freon comes out of the system.

Freon is the refrigerant that circulates through the sealed circuit of the refrigerator. Its movement is provided by a motor compressor. In the circuit, there is the narrowest part of the pipeline – the capillary tube, one end of which is connected to the evaporator. At the outlet of the capillary due to getting into a “wider” cross-sectional tube – the evaporator – the pressure of freon drops sharply, it boils and evaporates. This process is accompanied by the absorption of a large amount of heat by the refrigerant. This is how the refrigerator is cooled.

If the tightness of the circuit is broken and there is a leak somewhere, freon starts to escape from the system, and pressure drops. This leads to a decrease in refrigerator performance and an increase in refrigerator temperature. To compensate for the lack of cold, the compressor runs without shutting down. At this point, the refrigerator may gurgle quite loudly. This is due to air entering the system, which is mixed with freon circulating through the tubes.

Then, as all the freon leaves the system, the chambers stop freezing altogether and the compressor motor will not turn on. The refrigerator goes silent.

The most common cause of leaks is corrosion. Micro holes are formed in the perimeter heating circuit of the freezer, in the evaporators, or in piping connections.

Some refrigerator models – most often large-volume or low-temperature models – have an external fan near the condenser grill. Forced cooling allows the condensers to be smaller but still efficient.

Over the years, the condenser fan starts to make a whistling or knocking noises. This is caused by the wear of the bearings, the drying up of the lubricant, and the loosening of the fan mounts.

Pay attention! If after a strange noise you find that after a while the fan does not rotate at all, contact a workshop immediately! Overheating of the condenser may cause increased wear on the compressor and its failure.

As you can see, the reasons why the refrigerator makes strange, in the user’s opinion, sounds are very diverse. Some of them are completely normal refrigerator operations, while others signal breakdowns. If your technique was working without “sound accompaniment”, but suddenly began to unusual knocking, crunching like a cricket, buzzing, or gurgling, it is better to seek advice from a specialist.

Chula Vista Appliance Repair Company‘s technicians arrive on calls promptly. Our employee will come at a convenient time for you, determine the exact reason why the refrigerator began making strange noises, and if you agree to immediately carry out repairs. This is possible because the departure is carried out with all the necessary spare parts and tools for your model of refrigerator.

Contact Chula Vista Appliance Repair Company for assistance if your refrigerator has become too noisy!